Look what I found in the paper today…

Four years since its inception, JH Underground still can’t seem to figure out what its look is.

Perhaps the move to a more stylized “masthead” is to confuse people interested in the Tetons.  Online diaries typically feature photos of the administrator, or “blogger”, to alert readers to the nature of the content, namely the administrator’s achievements and grievances.

The erratic blog also has switched to all uppercase letters from all lowercase, an attempt to add heft (or look less “consciously” like reneworleans.com,).

While the last two banners were dull choices from the beginning, at least they had gained measure of local originality.  Surely the creative minds on the staff could have come up with something a little less obvious than the Cathedral Group, also featured in online mastheads for the Jackson Hole News&Guide and JH Weekly.  The antler arches?

*This is a “treated” text, a parody of a JH Underground post criticizing JH Weekly for lopping of “Planet” from its name as part of a redesign [“Planet opts for more generic name, ” June 3, 2009].  Bolded sections indicate changes from the original post, hich unfortunately did not provide the framework for commentary on the artwork itself, which we actually dig.” 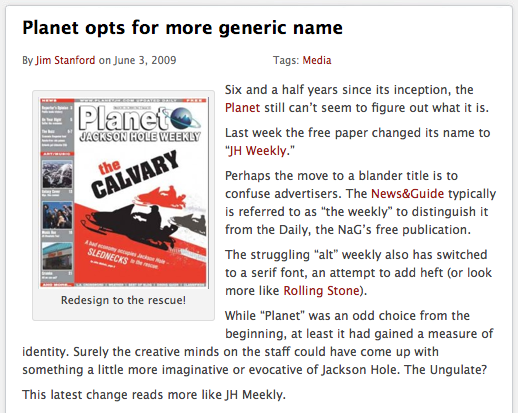 I was forewarned about the JH Weekly article… Jim emailed me and said they were gonna run an article that might look like it’s belittling my work.  I got kinda nervous… but I told Jim…

Went to the coffee shop this morning, picked it up, read it.  Not upset… at all.  Pshhhh… I love it!  We need more of this stuff around.  I’m a nice girl, I don’t usually grapple… but I don’t mind watching a good one.

And I think it’s actually flattering for JH Underground.  People are paying attention to you enough to mock you in their own publication.  That’s something.

[i will say that i’m glad they expressed that they “dig” it… i’m tough, but i’m not gonna lie… i don’t mind being liked either.]

3 thoughts on “a good grapple.”