The past few weeks have been in-sane. I left Adventure Cycling and Missoula and start working at MercuryCSC tomorrow in Bozeman… which meant I had to move from Missoula to Bozeman this last weekend.

Evan has to stick around in Missoula until mid-May to finish up school, so moving was especially emotional. I didn’t want to leave him. On Saturday morning, after a late night of cheers-ing and crying with dear friends, Evan and I packed up the rest of our apartment into a U-Haul. We had one last moment together in the apartment where we made a home together and I just lost it. Cried so hard. I am so happy for these next steps. For Bozeman. But leaving the apartment where Evan and I fell harder in love, where we found our passions for what we want to do with our lives, where we really became a team… it was so hard. So hard to leave.

But Evan comforted me and we moved on down the road to our new chapter. Evan drove the U-Haul and I followed in our [newish – woot!] Subaru. A little over an hour into the drive, Evan exited. I didn’t really question it. Then he turned around and got back on the highway, going the opposite direction. I figured I’d wait until he called me and told me what he was doing, but then he exited at the first exit we came to — a rest stop.

– I missed the last rest stop and so I turned around for this one.

– Okay. You just went to the bathroom like less than two hours ago.

When I came out of the bathroom, I started walking towards the car when Evan came around and said…

He took me a dozen yards over to this nice little spot. I was very confused. Evan then told me a bit of a story [after taking some deep breaths and maybe tearing up a bit].

Two years ago, I was in a horrible ski accident. The doctors thought I may have permanent brain damage, so they air-flighted me from Bozeman to Missoula while Evan drove our car back. We didn’t know if I would be okay. If I would make it. If I would be the same person the next time that we saw each other.

Evan told me that he got a phone call from our friend Jen [who had met me at the Missoula hospital when I arrived] on the drive, telling him that I was going to be okay. Evan told me that he immediately pulled off the highway, pulled into this rest area, and lost it. Cried so hard. He was so happy that he hadn’t lost me.

Evan asked me to walk a little more with him, over to this tree. He had some flowers and his bag and whatnot and I was shaking.

– I thought I could have lost you and I’m so happy that I didn’t. I never want to lose you again.

And I cry-collapsed on him, nodding, as he finished…

I have never cried like that. I have never sobbed out of complete love, complete happiness. Obviously, I said yes…

And he totally, totally, surprised me. As is evidenced by the complete moving outfit I’m wearing! The lack of make-up, the puffy eyes, and the fact that I’m wearing TOMS in public [I never wear TOMS in public! They’re moving shoes!]… all evidence of my complete shock.

Evan told me so many amazing reasons why he wanted to propose to me now. Those sentiments are near and dear to me and make me so happy. One of them was because I’m such a Sneaky Sneakerson and he knew I would be too distracted by moving and wrapping up projects to have any idea this was coming. STRONG WORK, EVAN. Mission accomplished.

I still can’t believe it. The ring is incredible, too. Evan mined a Montana sapphire [you heard right… he MINED IT HIMSELF] out of the Sapphire Mountains. And then he had my dear friend Laurel make a setting for it. It’s perfect. Absolutely perfect. Thank you, Evan. Thank you for perfectly knowing me. Knowing us. 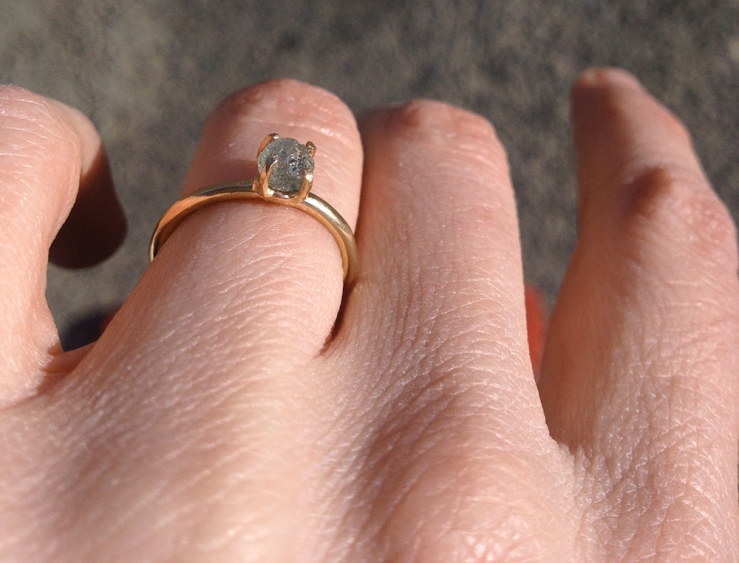 Oh, and he made the incredible ring box. [pictures coming soon.]

And so, after a quick stop on our moving extravaganza to get engaged, we were back on the road. In separate cars. I called my family and a couple friends [don’t worry, Evan had made sure he put a hands-free device in my car], but I mainly just kept calling Evan and saying…

– Lady Fiancé here, lookin’ for Boy Fiancé. Boy Fiancé, do you copy? Over and out.

I couldn’t believe that we had to get to Bozeman still and unpack. When we finally got there, we opened our apartment door and looked around a bit before I heard this banging from upstairs. My first thought was, “What the hell? Is this apartment really going to be this noisy??”

We went around the corner and my amazing friends Anna, Dan, and their baby Jack [who I hadn’t met yet!] yelled “SURPRISE!” or “CONGRATULATIONS!” or something as they popped a champagne bottle! I don’t exactly remember, because I think I blacked out for a hot-second from joy-excitement. I made a cry face and thought I was crying, but no tears came… I think my body was like, “What are you doing to us here?! We’re out of tears! Go drink some water!”

They helped us move in [which, I mean, c’mon, how nice!] and then we went out to a celebration dinner.

The next day was filled with sunshine and hiking and laughing and so. much. love.

– We should get engaged every time we move! It really takes the edge off.

A huge weekend for the Smeethens. What a way to start a new chapter.

Thank you for being my yes.